Tooteroo is the fourth character of the show called "Tickety Toc". 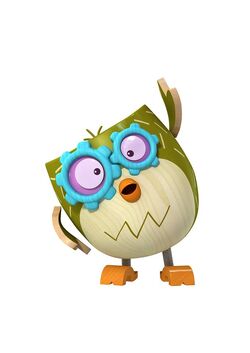 He is a well known owl that is seen in parts of Tickety Toc episodes. He always wants things to be perfect but he is usually unlucky with attempts (ex. failing to get an apple, trying to get a feather duster to fall in love with him, but failing to succeed, etc.) It is very rare that Tooteroo is mentioned or talked to by any of the characters. Chikidee mentioned his name in Bake A Cake time, and Hopparoo mentioned him in Giggle Time.

Tooteroo is seen usually about three times in one episode:

1. After Tommy and Tallulah realize their problem in the episode

2. After Tommy and Tallulah find a solution to the problem

Community content is available under CC-BY-SA unless otherwise noted.
Advertisement